Working Together: Hundreds of people moved a barn by hand, like ‘picking up a carton of eggs’

Hundreds of Amish men from Geauga County and surrounding areas carried a 35,000-pound barn by hand to relocate it about 200 feet on the property of a Welshfield business owner Oct. 11.

Based on the estimate of the barn’s weight and the 850 or more men on hand to haul it, each worker hoisted about 40 pounds.

The owner, Nelson Yoder, had been planning to move the barn and build another in its place for months. The new building would serve as a storage facility for Nelson’s handmade lawn furniture business, Wayside Lawn Furniture.

John Mullet is the original owner of Nelson’s property and helped build the barn around 1994. He said it’s not a sustainable structure for Nelson’s furniture business. 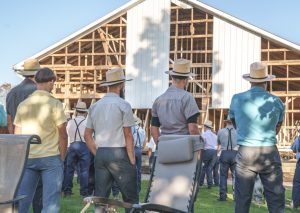 This building was, like, a machinery shed, and in the wintertime a lot of his machinery sat outside because they needed the building for the furniture, the outdoor lawn furniture,” Mullet said. “So, they had to do something — that one was hard to heat. You couldn’t heat it, it’s not insulated. So, he’s like, ‘What am I going to do?’ So, he starts thinking, I gotta move it. And we think about, you know, why not just move it by hand.”

Weeks before the event, Nelson had reached out to several Amish church districts asking for manpower to move his 40-by-64-foot barn, and the community assembled to make it happen.

In preparation for the move, most of the siding on the barn had been stripped off to reduce weight, and all of the floor was removed to make way for the laborers to carry the structure from the inside. On the day of the move, it was near shoulder to shoulder with workers. 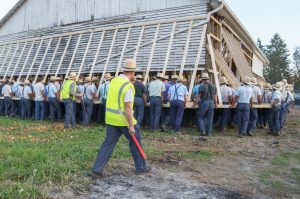 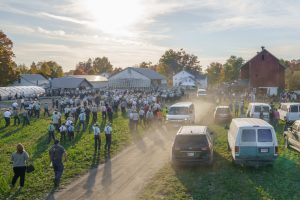 A temporary two-by-four buttress was installed around the perimeter of the barn to make room for an additional outer layer of barn-bearers.

Several four-by-four, six-inch props were installed on the underside of the barn to raise the building off the ground, to make easy work of picking it up and setting it down.

A large crowd of Amish men surrounded a hay wagon before 6 p.m. where John Yoder, Nelson’s brother from Hiram, spoke to the crowd about the plan to pick up the barn and walk with it. He stressed caution and said if anyone were to stumble while carrying the barn, they should “let out the loudest holler you can,” in which case the group was instructed to stop and hold it up until further notice.

Several “watchmen” wearing yellow reflective vests assisted in the placement of the workers and were directed to blow their whistles in case of an emergency, and help out during the move.

The group then tested the weight of the barn by picking it up and setting it back down. The weight bore little stress on the men, so off they went, walking the mammoth structure east past the red corn crib, where they pivoted north and, at John Yoder’s request, set it down to take a break.

But the men were eager to carry on, and in a moment’s time, they picked it back up, walked it south and sat it down on its new foundation, previously constructed from several interspersed four-by-four posts protruding from the ground about knee high. The men had moved the barn nearly the length of a football field in about 15 minutes and no one fumbled. It can now be used to store machinery again, and a new building can be erected in its place. 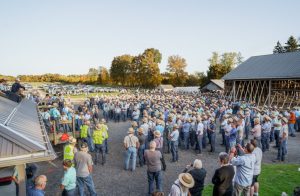 Mullet said he has moved a barn by hand before, but witnessing Nelson’s immense barn being carried by so many men was “quite something to see; I’ve never seen it like that.”

Bonnie Ward from Middlefield said she was impressed by how easy it was for the men to move the barn.

“It was a really cool thing to see,” Ward said. “That 850 people can pick up that barn just as if they’re picking up a carton of eggs. They can just pick it up and move it, and walk with it. I didn’t think it was going to be that easy, myself. A lot of hard work probably went into it, to design and get that all ready for it to move. And there’s a lot to be said, all these people donating their time and helping them do that. It looked like it worked perfect.”

Over 200 spectators came to watch, many of them wielding cell phones and cameras to film the event as it happened.

Joe Brilla from Burton recorded the affair with his GoPro camera at two frames per second. He posted the video to his YouTube channel and his Facebook page where he nicknamed the structure the “walking barn.”

Nelson’s brother, Levi Yoder, was excited to see the barn get moved and said “it was inspirational, and it’s just to show us what can be done when we all work together as brothers.”