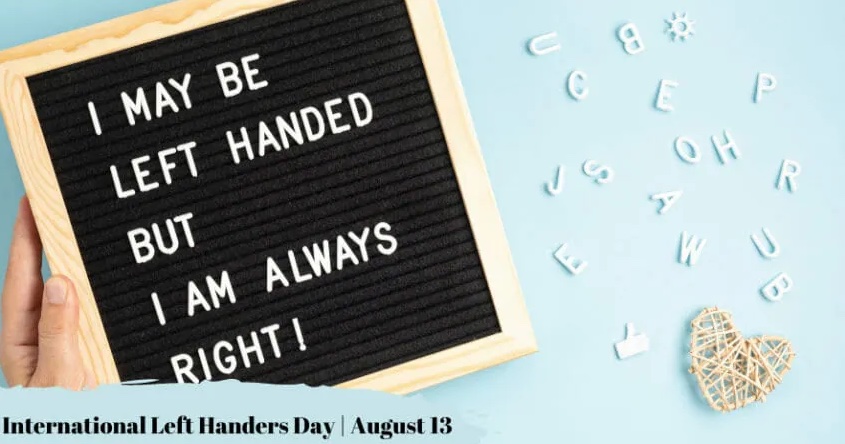 International Left Handers Day on August 13th recognizes all those individuals who have mastered using their left hand in a right-handed world. We take our hats off to you – left-handed!

Approximately 10% of the population are southpaws. Scientists don’t know why a person develops left-handedness. But it’s more likely a child will be left-handed if one parent is a lefty, too. Parents of left-handed children used to force them to use their right hands. In the eyes of right-handers, the predominant use of the left hand seemed evil. Parents feared their communities would shun their children. While we accept left-handedness more readily than days gone by, its occurrence hasn’t increased.

Famous Cartoonist Joe Wos, founder of mazetoons, states that his favorite day to celebrate is International Left Handers Day, being a lefty himself.

Many lefties seek to blend in because they will stand out soon enough. Their unique quality makes them feel awkward. They bump elbows or seem like a klutz. However, in a world designed for the right-handed, those who are other dominant adapt quite well. For example, eight United States presidents were left-handed, including Ronald Reagan, George H.W. Bush, Bill Clinton, and Barack Obama. Would the Sistine Chapel and the Mona Lisa stand the test of time if Michaelangelo and Leonardo de Vinci had been right-handed?

Left Handers Day recognizes the uncommon individual who throws, catches, writes, and uses a fork with their left hand. They view the world just a little differently, too. At a restaurant, they seek out the seat that will place their dominant elbow on the outside of the booth. Right-handed athletes groan a bit when the southpaw shows up as an opponent on the roster. They present a challenge right-handers aren’t always sure how to handle due to lack of practice. And yet, lefties square off against righties all the time.

Don’t be shy on Left-Handers Day. Show the world how brilliant and unique you are!